In December of 2013, the NCUA Board approved a final rule amending the incidental powers rule (Part 721) to clarify that a federal credit union is authorized to fund a CDA, a hybrid charitable and investment vehicle, as an activity  incidental to the business for which a FCU is chartered, provided the account is primarily charitable in nature and meets  other regulatory requirements.
A Charitable Donation Account (“CDA”) investment allows a credit union to make a charitable contribution while allowing the contribution to pay for itself.  Over the last 3-5 years, an investment in the CDA would have allowed a CU  to increase its charitable contributions while retaining a net return significant higher than generated on  its traditional  investments. Please see below the Investment Return Chart.

First and foremost, let’s be clear: NAFCU listened to its members in 2009, and we listen to them now. We fight every day to make our members and the credit union movement stronger. As noted correctly in Ms. Anderson’s column, NAFCU has always been steadfast in strongly opposing the CFPB’s rulemaking authority over credit unions. At every possible opportunity, in hearings and in myriad letters to Congress, NAFCU has been unequivocal in its conviction.

Throughout the legislative negotiations in 2009, NAFCU strongly challenged the CFPB’s authority over credit unions.  Specifically, it was at the hearing before the House Committee on Small Business on Sep. 23, 2009, where Price Choppers Employees Federal Credit Union President and CEO Dawn Donovan, testifying on behalf of NAFCU, clearly stated our position. Notably, this was the only official hearing where credit union trade groups testified before Congress on financial reform, including the creation of the CFPB (earlier proposed as the CFPA). As Donovan pointed out:

“NAFCU does not believe such an agency should be given authority over regulated federally insured depository institutions, and opposes extending this authority to credit unions.

“As the only not-for-profit institutions that would be subject to the CFPA, credit unions would stand to get lost in the enormity of the proposed agency. Giving the CFPA the authority to regulate, examine and supervise credit unions, already regulated by the NCUA, would add an additional regulatory burden and cost to credit unions.”

Over time in subsequent testimony, we have been unwavering about the CFPB and the dangers of overregulation on credit unions.

As SRP Federal Credit Union President and CEO Ed Templeton, who is also NAFCU’s board chair, testified just this year:

“As expected, the breadth and pace of CFPB rulemaking is troublesome, and the unprecedented new compliance burden placed on credit unions has been immense.

“The impact of this growing compliance burden is evident as the number of credit unions continues to decline, dropping by 22% (more than 1,700) in institutions since 2007. A main reason for the decline is the increasing cost and complexity of complying with the ever-increasing onslaught of regulations. Since the second quarter of 2010, we have lost 1,100 federally insured credit unions, 96% of which were smaller institutions below $100 million in assets. Many smaller institutions simply cannot keep up with the new regulatory tide and have had to merge out of business or be taken over. Credit unions need regulatory relief, both from Congress and their regulators.”

Our position was not a politically popular one, nor was it an easy one to take. NAFCU’s board of directors and our lobbying team stood strong under unbelievable political pressure throughout the Dodd-Frank Act negotiations. But then again, NAFCU has never shied away from difficult positions. Over the years, NAFCU has always taken positions that are in the best interests of NAFCU members and the credit union industry. And that will never change.

Ms. Anderson is also correct in noting that the CFPB represents a significant hazard for credit unions – especially when you consider that not all the Dodd-Frank rules have been implemented yet. According to the Davis Polk report, in the first quarter of 2015, 235 (60.3%) of the 390 total required rulemakings have been finalized, while 84 (21.5%) rulemaking requirements have not yet been proposed. With still so many rules outstanding, it is a rather ominous outlook for credit unions and all the more reason for us to stand fast by our position.

NAFCU continues to believe credit unions should be exempt from CFPB rulemaking, and we will continue to advance that with full vigor at every juncture possible because it is the right thing to do. For us, there is little comfort in being right and seeing our worst predictions regarding the burden of overregulation come to fruition while our industry erodes.

In response to a letter from House Financial Services Chairman Jeb Hensarling (R-Texas), NCUA Board Chairman Debbie Matz wrote that the NCUA has not and will not participate in Operation Choke point.

“NCUA does not dictate which businesses credit unions can serve as long as these businesses are legal and within the credit union’s field of membership, and the credit union can serve them safely and soundly,” she wrote in the letter dated April 15. “Going forward, the NCUA will continue to ensure that all our material and guidance clearly outline these policies.”

Matz explained that the NCUA issued a memorandum to all field staff in August of 2014, which stated the agency’s policy for opening and closing accounts is a decision generally left to the credit union.

“The decision may be based on a credit union’s particular business objectives, its evaluations of the risks associated with offering particular products or services and its capacity and systems to effectively manage those risks,” she wrote.

Mike Schuetz, owner of Hawkins Guns LLC in Wisconsin, has claimed the $272 million Heritage Credit Union in Madison, Wis. closed his account due to Operation Choke Point. Schuetz recorded a conversation with a branch manager who said the credit union was being pressured by regulators.

“They came in, looked at our books, looked at everything and said, ‘Here's some accounts we feel like we’re going to regulate you on,’ and they kind of put the screws to us on what we could and couldn't do type thing,” a manager stated in the recording. “We’re not anti-gun as a company but our hands are tied.”

“Our position all along has been our inability to serve Mike at Hawkins Guns was simply a temporary situation,” she said. “It's not reasonable to think you can buy the software, plug it in and it just works. It takes a little bit of programming.”

Rauch said the credit union’s assets grew to $100 million in three years so the amount of monitoring for cash intense businesses increased.

“We began working on accommodating cash intense businesses no matter what the type of business. It wasn't strictly directed at guns or gun shop owners,” she said.

Compliance and How Much It Cost You!

Do you believe someone is actually measuring how much it costs to comply with all the new regulations.

BCI stands for Bank Compliance Index, a quarterly evaluation system created by financial experts at Continuity (formerly Continuity Control), a New Haven, Conn.-based provider of automated compliance solutions, to track the incremental burden on financial institutions of keeping up with regulatory changes. The number 1.35 represents the number of employees needed to address just the new regulations issued during the first three months of 2015.

“In real terms, Perdue said the BCI was calculated by measuring specific variables within the financial compliance realm. In this case, the 1.35 ranking is drawn from the efforts it would take to respond to the 61 new regulatory items issued during first quarter that comprised an aggregate 1,605 pages. At an estimated 331 hours necessary to address the regulations, multiplied by an average salary-and-benefits rate of $44.22 per hour for employees involved throughout the entire process, the financial cost of responding to new regulations would be $30,998 per institution for first-quarter activity.”

Is your credit union being pressured by auditors to close or not open certain accounts because they feel they are too risky.

Not sure if you know about Operation Choke Point so I have included these 2 article's,

When Mike Schuetz, owner of Hawkins Guns LLC in Hawkins, Wis., asked the branch manager for an explanation, he was told the credit union had received pressure from regulators. He recorded his conversation with the manager, who also explained the credit union did not serve businesses associated with guns and ammunition.

Schuetz is convinced the situation occurred as a result of Operation Choke Point, which the U.S. Department of Justice established to reduce fraud and reputational risk to financial institutions by pressuring them to refuse business from risky sectors.

“They told me I had to close it because I was a high-risk industry and they were not able to service me,” Schuetz told CU Times. “The local manager had a clip board from which she read off of with certain industries listed.”  Operation Choke Point Accuser Speaks Out

House Financial Services Committee Chairman Jeb Hensarling and other committee leaders have asked the NCUA and the CFPB to cease any enforcement of Operation Choke Point.

The lawmakers requested that the agencies publicly disclaim their past, present and future involvement in Operation Choke Point or any similar operation. The agencies were asked to clarify their policy for documenting and reporting orders to financial institutions regarding the termination of deposit account relationships. Lawmakers also requested a notice in writing from each agency to confirm that employees have been notified about the policy.  Lawmakers to NCUA: Abandon Operation Choke Point

NCOFCU Has a NEW LOOK and FEEL 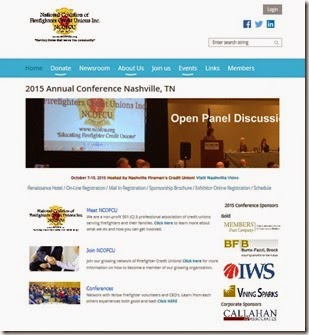 We know your time is valuable and you don’t want to spend time trying to navigate trough a website to get what you want so we have tried to make it sweet and simple.

Credit Unions
Each credit has been assigned an administrator, in most cases it is the CEO.
The administrator can:

If you would rather have a staff member be the administrator, please contact NCOFCU administration at 305-951-3306 with any issues or e-mail ncofcu@ncofcu.org

We have tried to work out all the bugs, but if you find any please let us know.