"There will not be a recession in the U.S. in the near future!" Mike Schenk, deputy chief advocacy officer and chief economist at CUNA

WASHINGTON—There will not be a recession in the U.S. in the near future, according to a CUNA economist, who is citing two reasons for the forecast: the inverted yield curve this time is not a sign of a downturn, and the economy will continue to expand.

Mike Schenk, deputy chief advocacy officer and chief economist at CUNA, said the uncertainty and volatility in the economy brought about by the trade war with China and debate around what the inverted yield curve might mean, as long-term Treasury yields drop below those of shorter-term T-bills.

“When the yield curve inverts, the U.S. generally heads toward a recession. It is typically a very accurate predictor of a recession,” said Schenk. “But this time we don't think that's going to happen for variety of reasons.”

A key reason for CUNA’s stance, said Schenk, is that what has triggered the inverted yield curve this time is not what typically causes the rate imbalance.

“If you look back, historically there's been one or two instances when the yield curve inverted and no recession has followed,” explained Schenk.

And with 70% of the economy driven by consumers, that bodes well for the near future, Schenk said.

“When we look to the consumer sector, generally we see not only a healthy consumer sector but a consumer sector that reflects financial health that's improving, not deteriorating,” explained Schenk. “That says to us that we're probably in good shape overall and we do expect to see expansion continue.”

Schenk said CUNA expects the economy to continue to grow at a slower “but healthy” rate.
“In that context, our baseline forecast calls for the credit union industry to perform quite well over the next 12 to 18 months,” he said. “This is something that is more likely than not. We're definitely past the peak of the credit cycle, that's clear. We expect credit union loan growth to continue to come in at healthy, but lower levels; earnings to come in at healthy levels, and asset quality to maintain its relatively high position at the moment.”

The Federal Reserve “will act as appropriate to sustain the expansion,” Chairman Jerome Powell

JACKSON HOLE, Wyo.–In comments at the conclusion of the Fed’s annual summer retreat here, Federal Reserve Chairman Jerome Powell said objective is to maintain the economic expansion, but also made an indirect reference to President Trump’s tariffs by saying “trade policy uncertainty” was the new challenge.

Less than an hour after delivering his comments, Trump tweeted the Fed has done “NOTHING” and then added, “My only question is, who is our biggest enemy, Jay Powell or Chairman Xi?”

During his prepared statement, on several occasions Powell said the Fed “will act as appropriate to sustain the expansion,” adding that when it comes to the Fed’s dual mandate on full employment and price stability, the “economy is close to both goals.”

“Our challenge now is to do what monetary policy can do to sustain the expansion so that the benefits of the strong jobs market extend to more of those still left behind, and so that inflation is centered firmly around 2%,” Powell said.
With many analysts attempting to read the Fed tea leaves for plans for further rate cuts, Powell said among the challenges to Fed officials is there are “no recent precedents to guide any policy response to the current situation.” The Fed cut rates at its July meeting and many are anticipating another quarter-point cut when the Fed meets in September.

“While monetary policy is a powerful tool that works to support consumer spending, business investment, and public confidence, it cannot provide a settled rulebook for international trade,” said Powell. “We can, however, try to look through what may be passing events, focus on how trade developments are affecting the outlook, and adjust policy to promote our objectives.”

The Toolkit
Powell said the Fed is examining “monetary policy tools we have used both in calm times and in crisis, and we are asking whether we should expand our toolkit.”

Looking forward and beyond just the U.S. economy, Powell added,  “The global growth outlook has been deteriorating since the middle of last year. Trade policy uncertainty seems to be playing a role in the global slowdown and in weak manufacturing and capital spending in the United States.”

The New ‘Challenge’
“Because the most important effects of monetary policy are felt with uncertain lags of a year or more, the Committee must attempt to look through what may be passing developments and focus on things that seem likely to affect the outlook over time or that pose a material risk of doing so,” he added. “But fitting trade policy uncertainty into this framework is a new challenge. Setting trade policy is the business of Congress and the Administration, not that of the Fed.”

Powell did not mention the yield curve inversion that has been rattling the markets, in which the 2-year Treasury note has surpassed the 10-year, a reliable recession indicator for the past 50 years. Minutes from the last meeting also offered only passing reference to the curve spread, and Powell made no mention of recession in his speech.

Trump thundered Powell on Twitter, saying “the Fed did NOTHING.”

ARLINGTON, Va.—Total retail sales increased 0.7% in July, and while consumer growth continues to "buoy" the economy, other threats could have a negative impact, according to NAFCU Chief Economist and Vice President of Research Curt Long.

"Three segments that have struggled recently – clothing stores, sporting goods and hobby stores, and electronics and appliance stores – showed solid gains last month," said Long in a new NAFCU Macro Data Flash report. "Tariffs represent a threat to the future outlook for sales, although any negative impact may operate with a lag if skittish consumers move spending forward to get ahead of potential price impacts.

"With yet another solid economic report in hand, the Fed faces a difficult decision. Markets are convinced that the trade war, slow growth abroad, and a range of geopolitical risks mean another rate cut is forthcoming," he added.

Results among the major retail segments were mostly positive in July. The biggest gains were among nonstore retailers (+2.8%), gas stations (+1.8%), department stores (+1.2%) and restaurants and bars (+1.1%). The largest declines during the month included sporting goods and hobby stores (-1.1%) and motor vehicle and parts dealers (-0.6%).

"FOMC officials have been conspicuous in their silence since July's meeting, but next week's annual gathering in Jackson Hole should provide some clarity," Long concluded.


See you in Clearwater Beach

CUToday NEW YORK–In what many had anticipated would be a (slowly) rising rate market, mortgage rates have dropped significantly, with the 30-year fixed-rate mortgage hitting its lowest point since November of 2016. 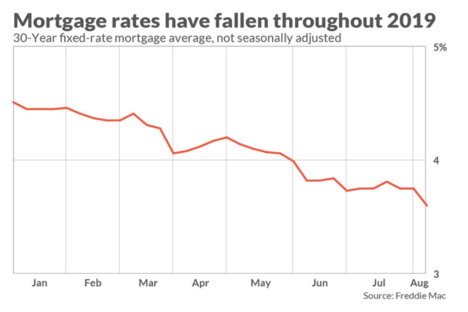 According to Freddie Mac, last week ended with the 30-year fixed-rate mortgage averaging 3.6%, down 15 basis points from the previous week. Last week marked the third-largest weekly decline for the 30-year fixed-rate mortgage this year — so far in 2019, rates for the loan product have only posted a weekly increase on eight occasions, Freddie Mac reported.

Meanwhile, the 15-year fixed-rate mortgage also declined 15 basis points to an average of 3.05%, according to Freddie Mac. The 5/1 adjustable-rate mortgage averaged 3.36%, representing a decline of 10 basis points, the GSE added.

Mortgage rates track the 10-year Treasury note, the yield on which has fallen sharply over the past year due to tensions over trade and other issues.

While rates continue to decline, its bittersweet for many would-be homeowners. As CUToday.info has reported, there continues to be a shortage of homes, especially for first-time buyers. 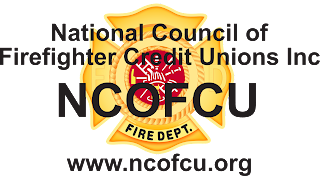 WASHINGTON–As many had expected, the Federal Open Market Committee has cut rates by 25 basis points to a target rate for the federal funds rate of 2% to 2.25%.

“Information received since the Federal Open Market Committee met in June indicates that the labor market remains strong and that economic activity has been rising at a moderate rate,” the Fed said. “Job gains have been solid, on average, in recent months, and the unemployment rate has remained low. Although growth of household spending has picked up from earlier in the year, growth of business fixed investment has been soft. On a 12-month basis, overall inflation and inflation for items other than food and energy are running below 2 percent. Market-based measures of inflation compensation remain low; survey-based measures of longer-term inflation expectations are little changed.”

The Fed said it moved to cut rates to meet its statutory mandate of fostering maximum employment and price stability.

“This action supports the Committee's view that sustained expansion of economic activity, strong labor market conditions, and inflation near the Committee's symmetric 2% objective are the most likely outcomes, but uncertainties about this outlook remain,” the Fed said. “As the Committee contemplates the future path of the target range for the federal funds rate, it will continue to monitor the implications of incoming information for the economic outlook and will act as appropriate to sustain the expansion, with a strong labor market and inflation near its symmetric 2 percent objective.”

Following the rate decision, Fed Chairman Jerome Powell said during a press conference, "We are thinking of it as a mid-cycle adjustment to policy. I'm contrasting it with the beginning of a lengthy cutting cycle."

That statement caused the Dow to drop more than 300 points as the markets interpreted it to mean no more rate cuts might take place. Powell later clarified the Fed may consider another rate cut sometime soon, but the cycle of cuts will not last a long period of time.

Separately, the FOMC said it will conclude the reduction of its aggregate securities holdings in the System Open Market Account in August, two months earlier than previously indicated.