Federal Reserve The Committee anticipates that only gradual increases in the federal funds rate are likely to be warranted in coming years,

For more than a century, the Economic Club of New York has served as one of the nation's leading nonpartisan forums for discussion of economic policy issues. It is an honor to appear before you today to speak about the Federal Reserve's pursuit of maximum employment and price stability.

In December, the Federal Open Market Committee (FOMC) raised the target range for the federal funds rate, the Federal Reserve's main policy rate, by 1/4 percentage point. This small step marked the end of an extraordinary seven-year period during which the federal funds rate was held near zero to support the recovery from the worst financial crisis and recession since the Great Depression. The Committee's action recognized the considerable progress that the U.S. economy had made in restoring the jobs and incomes of millions of Americans hurt by this downturn. It also reflected an expectation that the economy would continue to strengthen and that inflation, while low, would move up to the FOMC's 2 percent objective as the transitory influences of lower oil prices and a stronger dollar gradually dissipate and as the labor market improves further. In light of this expectation, the Committee stated in December, and reiterated at the two subsequent meetings, that it "expects that economic conditions will evolve in a manner that will warrant only gradual increases in the federal funds rate."

In my remarks today, I will explain why the Committee anticipates that only gradual increases in the federal funds rate are likely to be warranted in coming years, emphasizing that this guidance should be understood as a forecast for the trajectory of policy rates that the Committee anticipates will prove to be appropriate to achieve its objectives, conditional on the outlook for real economic activity and inflation. Importantly, this forecast is not a plan set in stone that will be carried out regardless of economic developments. Instead, monetary policy will, as always, respond to the economy's twists and turns so as to promote, as best as we can in an uncertain economic environment, the employment and inflation goals assigned to us by the Congress.

To read complete report Click HERE
at March 30, 2016 No comments:

CUNA informs CUs of need-to-knows ahead for MBL changes

"WASHINGTON (3/28/16)--With the National Credit Union Administration’s (NCUA) member business lending (MBL) rule finalized, all that’s left is for credit unions to gain an understanding of how the rule will affect them. The Credit Union National Association’s (CUNA) compliance staff has put together a CompNote on the rule, which is now available.

The rule, which becomes effective Jan. 1, 2017, completely overhauls the NCUA’s MBL regulations, removing almost all MBL requirements not present in the Federal Credit Union Act. The NCUA called the approach a “broad, principles-based regulatory approach,” and it is predicated on the expectation that credit unions will maintain prudent risk management processes and sufficient capital commensurate with risk".

The city drew the money down from its $900 million line of short-term credit, which is akin to putting the tab on a credit card. The loan carries an interest rate of about 3 percent.

The money is not due to police and fire pension funds until the end of the year. But the city had to borrow the money to meet a March 1 deadline for having the cash in its treasury, Budget Director Alexandra Holt said. "State law requires that we deposit the money with the treasurer to demonstrate we have the money available if it's needed," she said."
at March 26, 2016 No comments:

AUSTIN, Texas–How does the behavior of iPhone users compare with Android users when it comes to online banking?

According to the latest Monkey Insights “little data” report from Malauzai Software, which is based on February 2016 data for 350-plus banks and credit unions representing more than seven-million logins from more than 400,000 active Internet and mobile banking users:

Invest in NCOFCU's Future With a Members Trust CDA Investment

For more information and examples go to; www.ncofcu.org/Resources/Documents/ALMAdvSingletb.pdf

What is a NCUA Charitable Donation Account (CDA) Investment?
CDA is a hybrid investment which grants a federal credit union expanded investment powers to fund charitable contributions. To qualify as a CDA, the primary purpose of the investment must be to fund charitable contributions. To the meet the primary purpose test, a minimum of 51% of the earnings and capital gains must be distributed to charities at a frequency of no less than five years. Gains and interest in excess of the 51% are booked as investment income by the credit union. Total investments in CDAs may not exceed 5% of the credit union’s net worth.

How is a CDA Investment booked?
The CDA should be recorded as a Charitable Donation Account using market value accounting (mark to market). Dividends and income to the extent not paid out should be recorded as other investment income. Charitable contributions can be expensed or applied as an offset against income and dividends. Each credit union should consult its Auditor to ensure compliance with GAAP. 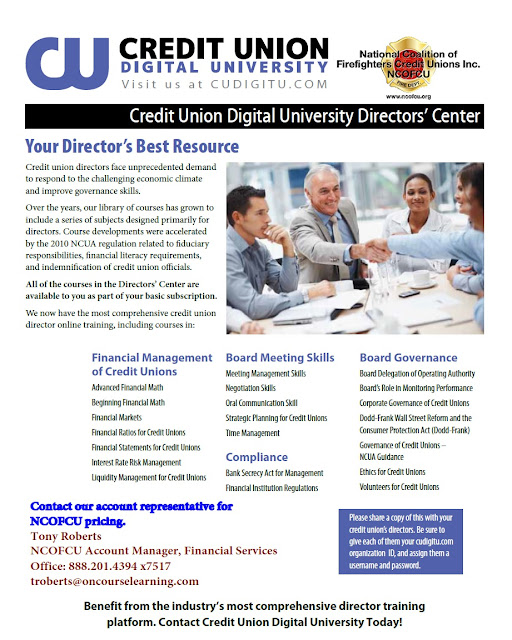