Albany firefighter is making a ‘miracle’ recovery from near-fatal sepsis

Out on their weekly date night on a Monday in early February, Albany firefighter and father of two Josh Woodward told his wife, Chelsea Woodward, that he thought he’d pulled a muscle in his arm.
Two days later, the 33-year-old was in the ER with sepsis. Doctors gave Josh a 5 percent chance of survival as the infection spread from his arm to his chest. He had a heart attack. His kidneys were failing. 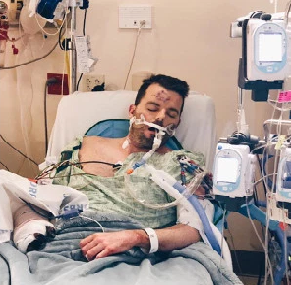 Two weeks later, after a massive outpouring of support from his community and strangers online following his fight for life, Josh has beaten the odds to make it into that 5 percent. (One in three people who die in a hospital have sepsis, according to 2018 Centers for Disease Control and Prevention statistics.)

“As of yesterday, his blood work came back free of sepsis,” Chelsea, 31, tells The Post. “The doctors are throwing around the word ‘miracle.’ ”

The way Josh contracted sepsis is almost as tragic as his recovery is remarkable. “He coughed strep directly into his blood,” says Chelsea. “He did one of those vampire coughs in his arm and he had a small laceration in his shoulder.”

Josh had unknowingly been carrying the disease in his throat.

Now his medical team doesn’t anticipate any further problems, Chelsea says. This only a few days after doctors seemed certain Josh would lose his arm — if not his life. While “there’s a couple fingers” that may need amputation, Chelsea says, that’s “small change,” comparatively.
Josh Woodward has yet to fully grasp the outpouring of public support he’s received .

A long road to recovery still faces Josh, who will likely stay in the hospital for at least another two weeks. Chelsea admits she’s exhausted, but feels uplifted by the influx of love she’s witnessed.


https://www.gofundme.com/support-the-woodward-family
Contributions can be sent to:

Royal for Credit Unions offers a range of automotive service plans for new and used vehicles that provide exceptional protection against repair costs while increasing value for your Members!


Our plans are backed by more than 50 years of dependability and customer satisfaction. We offer a world-class service organization, marketing, training, and a complete line of services.

We have plans to fit most every vehicle and Members budget. Rock-Solid Stability! Royal for Credit Unions offers you the opportunity to have your programs fully backed by the most reputable insurer’s in the extended service contract industry.

Building a relationship of trust with your members is essential to the success of your business. Royal is a partner on which you can build solid, long-term relationships.

Remember "You're not alone with NCOFCU"
at February 22, 2019 No comments: Links to this post

With the number of small credit unions shrinking day by day from closures and mergers it is essential that you know that the National Council of Firefighter Credit Unions Inc. (NCOFCU) is here for you!

Remember "You're not alone with NCOFCU"

The NCUA approved 53 consolidations during last year’s fourth quarter, bringing the total number of mergers to 192 in 2018.

In addition, an emergency merger in January consolidated Progressive CU with PenFed. According to NCUA financial performance reports, Progressive posted net income losses of more than $102 million at the end of 2018 because of its non-performing taxi medallion loan portfolio.

Forty-five credit unions received the nod to merge from the NCUA for “expanded services.” Forty-one of these financial cooperatives were well under $50 million in assets.

F&A Has a new CEO

Green has more than 12 years of experience in the financial services industry, as well as another five years of experience in the financial advisory industry, and most recently was EVP/CFO with KeyPoint Credit Union in Santa Clara, Calif.  Prior to his time at KeyPoint Credit Union, Green was EVP/CFO at Gateway Bank for five years.

“I am very excited to be joining F&A Federal Credit Union and am honored to have been given the opportunity to lead such an organization,” said Green in a statement. “There is tremendous opportunity to take what is an already fantastic credit union and make it into an even greater financial resource for the membership and the community.”
F&A FCU has approximately 45,500 members.

About F&A
F&A was chartered in 1936 to provide financial services to employees of the Los Angeles County Forestry, Fire and Agricultural Departments. From opening day assets of $26, F&A has grown to holdings in excess of $1.5 billion and over 45,000 members. In addition to employees and families of the Forestry, Fire, Agricultural and Weights & Measures Departments, F&A serves employees and families of cities that contract services with the LA County Fire Department, plus various other cities employees throughout Los Angeles County. As one of the largest credit unions in America, we've had a singular commitment for over 75 years:
To ensure that our members receive caring and personal service along with exceptional value.

The 116th Congress has begun, but the seats are barely warmed and bank trade associations are already making their demands. On that list are credit unions, which is not at all surprising. This time, they are making a new argument using bipartisanship as the platform to call out the federal corporate income tax exemption for credit unions. While we appreciate their fervor to defend their industry, the picture painted is quite flawed.

Lobbyists continue to harp on what seem like tough conditions for banks but overtly omit a few key facts, such as conveniently leaving out that banks maintain the highest levels of capital ever and still dominate the financial industry. Moreover, they sometimes conflate community banking on Main Street with big banking on Wall Street. This makes no sense.

The fact is that credit unions are nonprofit financial institutions that exist to serve their community members while also strengthening the economy. It seems our bigger counterparts think that only the growth of one kind of financial institution is allowed. If a credit union grows, does it mean banks cannot? Should we not be focusing on the needs of the consumer anyway? The answer is very clear.

An independent study commissioned by National Association of Federally Insured Credit Unions shows that credit unions drive some $16 billion in economic growth each year in the United States. If the tax exemption is eliminated, the country would lose $38 billion in tax revenue, $142 billion in gross domestic product, and some 900,000 jobs over the next decade.

Lobbyists continue to insinuate that the tax exemption gives credit unions an unfair advantage over banks. But there are numerous differences in the way banks and credit unions operate, and these significant differences matter. The most important one is that credit unions direct any income back into their institutions for the benefit of their community members. Moreover, credit unions do that with restrictions and limitations in place.

Keep in mind that about a third of banks enjoy “Subchapter S” status so that they can distribute untaxed profits directly to shareholders. Banks also benefited from the corporate tax cuts. Rather than showcase their dedication to providing consumers with affordable products and working to regain the trust of taxpayers after the recession, big banks boosted shareholder payouts by $30 billion last year. The tax cuts made them richer, yet they still want to control the policies affecting credit unions.

The banking industry is responsible for at least $240 billion in fines since the 2008 financial crisis. But as penalties continue to roll out, it seems banks have not yet learned their lesson. For most companies, $240 billion in expenses would force them straight into bankruptcy. For the banking industry, that is the amount they have shelled out to pay their fines, and they still manage to turn out solid profits. Furthermore, $240 billion is nearly twice the assets of the largest credit union in the United States.

The study mentioned above shows that bank customers reap tangible benefits from the existence of competition from credit unions in the industry. In the decade covered in the study, credit unions had generated $159 billion in economic growth, and credit union member benefits were estimated at more than $56 billion. But a 50 percent reduction in credit union market share would cost bank customers anywhere from $7 billion to $16 billion a year through higher loan rates and lower deposit rates.

While bank lobbyists attempt to discredit the mission of the credit union industry, it is important to keep in mind that anyone promoting the end of the credit union tax exemption is in essence supporting the elimination of billions in economic growth, billions in federal revenue, and hundreds of thousands of jobs. Lawmakers have already answered that question in their conference report many times. The White House and Congress over the years have understood the benefits of the exemption to taxpayers and the economy. Whether the big banks believe it or not, the credit union exemption confers numerous benefits to consumers across the nation.