How Big Do Credit Unions Have to Be to Survive?

With two thirds of all credit unions at less than $100 million in assets, concerns are growing that competitive forces – dominant megabanks, the rapid uptake of digital banking, fintech inroads, low rates and more – could result in massive consolidation. Several industry experts and leaders see alternative ways forward. But how many small institutions can follow that path? Or will?

With the tectonic changes altering retail banking — “trillionaire” banks spending billions on digital technology and sophisticated marketing, consumers increasingly able to switch institutions (or divide up their business) on an app — can a $50 million, $200 million or even a $500 million credit union expect to survive, much less thrive?

Credit unions, much like community banks, have seen their share of doomsday headlines. Yet thousands remain. In fact, the credit union industry saw significant growth in terms of total assets and members in 2020, as shown in the first of the two charts below. But that industry-wide picture masks significant pressures building up within portions of the industry.

That stress prompts some observers to state that credit unions below a certain size — some put it as high as $1 billion — are in jeopardy. The belief is that many smaller credit unions will be forced to merge into a larger institution to achieve the scale needed to exist.

It’s easy to dismiss such views as exaggeration, yet here is what the industry’s regulator says in its 2020 Annual Report:

“Small credit unions face challenges to their long-term viability for a variety of reasons, including lower returns on assets, declining membership, high loan delinquencies, and elevated non-interest expenses. If current consolidation trends persist, there will be fewer credit unions in operation and those that remain will be considerably larger and more complex.”

While overall membership continues to grow strongly, about half of federally insured credit unions had fewer members at the end of 2020 than a year earlier, NCUA states.

The federal agency defines “small credit unions” as those with less than $100 million in assets. There were 3,387 of them by that measure at year end 2020, representing 66.4% of all federally insured credit unions.

By contrast, many of the largest credit unions grew rapidly in both assets and 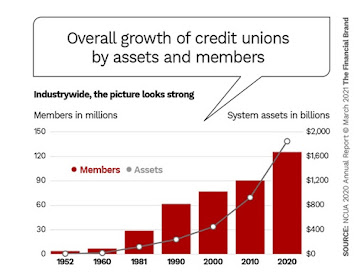 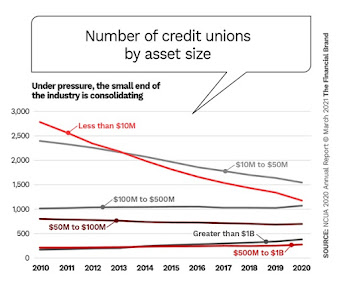 A Tale of Two Industries

The impact of all these competitive forces, including stiff competition from fintech lenders and neobanks, is being felt very unevenly within the industry, as shown in the table below. Return on assets for the smallest credit unions is tiny, and only rises to levels that will enable an institution to grow at the larger institutions.

Beyond ROA, most measures of growth for the smaller institutions were negative in 2020, while the large institutions saw strong growth. 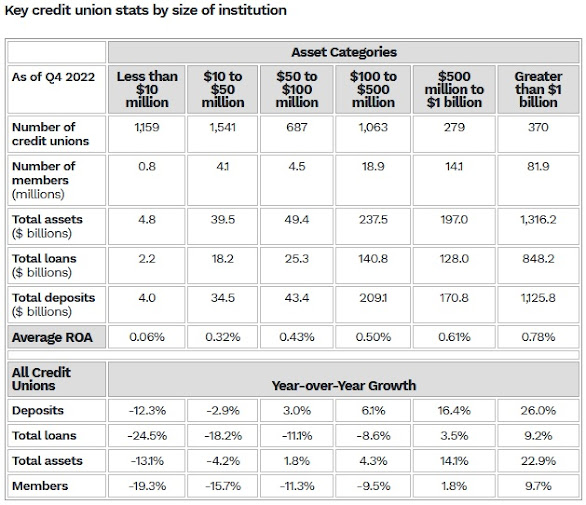 “Thousands of credit unions face the prospect of shrinking market share and declining ROA if they cannot achieve the scale necessary to evolve,” says Jim Perry, Senior Strategist for Market Insights. “There will be exceptions, but competition is more intense, the consumer is less loyal and the pressure to consolidate is growing. Credit unions must face the reality that size and strength matter.”

Even NCUA points out that many credit union customers have several financial institution alternatives and can move funds quickly and easily among them. In fact, of consumers who consider a credit union to be their primary institution, just over half (56%) also use a bank for some type of financial service, the agency states.